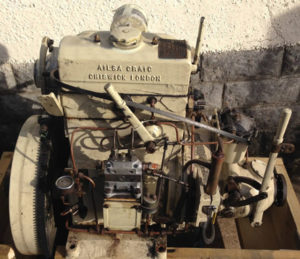 The Ailsa Craig Engine Company was a manufacturer of marine and specialist, made-to-order engines between 1891 and 1972.

Named after the Scottish island of Ailsa Craig, the company began as a bicycle manufacturer in Glasgow in 1891, moving to Putney (and later Chiswick) in London where they began building motor vehicles.

Ailsa Craig produced the world’s first V12 engine in 1904, worked for the Ministry of Munitions and the Admiralty during the First World War and in 1926 was granted a Royal Appointment.

There was further war commitment in 1939 from an additional factory site in Twickenham until after the war when the factory moved to Ashford where it continued to produce high quality diesel engines until sold to Warsop’s Fram Group in 1964. The company was closed down in 1972.