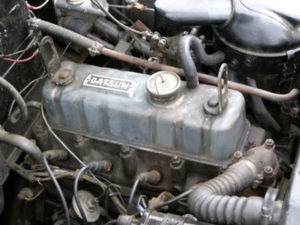 The breakdown of the engine code is as follows:

The crankshaft of the A10 motor is supported by three main bearings. These main bearings are lubricated through oil holes which intersect the main oil gallery in parallel with cylinder bores. The A10 uses flat head pistons. The piston pin is connected to the piston by a full floating fit and to the connecting rod by a press fit.

Full pressure lubrication is directed to the connecting rod through drilled oil passages from the adjacent main bearing journal so that oil is supplied to give maximum lubrication just before a full bearing load is applied.

The intake manifold has two openings: one is located on the primary side and the other on the secondary side.

The exhaust manifold has a heat control valve which assures stable and smooth engine running after starting in cold season. The manifold is connected to the exhaust pipe by flangers, which completely eliminate exhaust leaking.